welcome to the begining of a three part beetroot bonanza! ive decided to dedicate the next three posts and recipes to this, king of root veg. the earthy sweetness of beetroot makes it perfect for an array of recipes even cakes and sweets! it comes in all sorts of colours, the 'chioggia' being the trendy one at the moment, with its pink and white bulls eye patterning. but my all time favourite has to be golden  beetroot, especially because im finding it hard to source seeds here in ireland. its been tempting me to smuggle some in the post next year. anyone flying over from the states, perhaps? the golden beetroot is great for salads and paired with its bloodier brother adds a bright suprise to a sunday roast. the best part is that golden beetroots don't dye your hands or other foods - they're just polite that way. they can also be used in the same recipes as regular red beetroots. 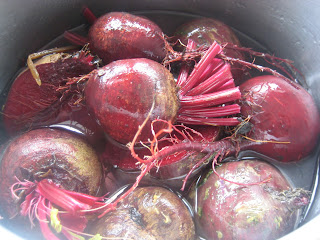 disregard my love for golden beetroots, because the next three recipes are all going to feature the red guys. ive got a recipe for a minted beetroot hummus, candied beetroot truffles, and another -veggie cocktail! you're listening now, right?

i've only actually tried one of these recipes, so i hope i can pull the other two off with out too much blood (or juice) on my hands. and since its raining everyday (bar today and yesterday!) ive got an extra couple hours to spend in the kitchen. but there's some great news i've learned from a new book i'm reading: How to Grow Winter Vegetables, by Charles Dowding, he says that wet crappy summers are great for winter veggies! (without the 'crappy' part) and summer blogging (he didn't say that, either) so its not so bad, really! 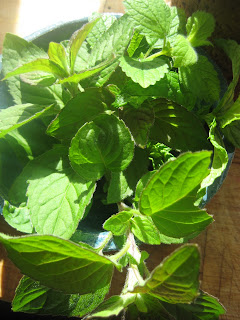 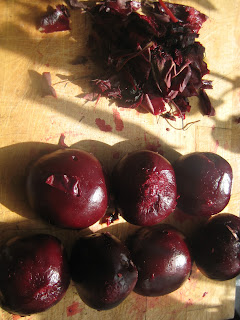 Growing beetroot: i once read in a companion planting article its a good idea to plant beetroot with onions , and the past two years i've grow them side by side in the same drill and i had beetroot harvests within 3 months of growing, as well as big onions. this year i grew them seperate and they have taken longer to mature. i always sow my beetroot direct into the ground, ive found it hard to transplant beets without losing a few in the process.
while the roots are forming its ok to take a few leaves for salad every so often, just don't take too many leaves or the roots may take longer to develop.
for the best flavour its best to harvest beetroot once it reaches the size of a golf ball or as large as a snooker ball.
beetroot is a biennial plant, which means it flowers in its second year. they do keep pretty well in the ground in winter and store well in a cold larder, if dug up, for a good few weeks. 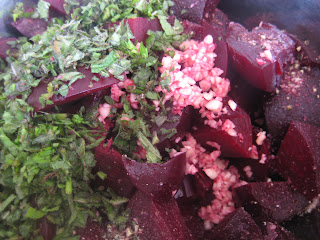 Cooking Beetroot (some ideas): as i said before beetroot can be used for a myriad of recipes, as i will demonstrate in my, three part beetroot blowout. boiled beetroot is great diced up in salads, there's no need to peel beetroot, its easier to rub off the skins after cooking. a good tip is to use gloves while removing their skins. the same goes for roasted beetroot, roasting intensifies their sweet earthy flavour. a beetroot juice reduction is amazing with pan fried white fish. grated beetroot is a great substitute for carrots in carrot cakes. the chioggia beetroot are great thinly sliced and tossed in lemon juice or rice wine vinegar and served in salads, their coloured stripes tend to fade when cooked.
beetroot stalks are a great alternative to spinach: chop the stems seperately and saute with an onion till tender then add leaves till they wilt down, season with salt, lemon juice and chilli for a lovely side dish. tender baby leaves can also be used in salads (see previous post.) so dont throw away the stalks and leaves!
that said, i hope you enjoy the next few recipes and that they inspire you to grab some locally grown beetroot, at your next visit to the farmer's market.
"The beet is the most intense of vegetables. The radish, admittedly, is more feverish, but the fire of the radish is a cold fire, the fire of discontent not of passion. Tomatoes are lustly enough, yet there runs through tomatoes an undercurrent of frivolity. Beets are deadly serious.... The beet is the murderer returned to the scene of the crime. The beet is what happens when the cherry finishes with the carrot. The beet is the ancient ancestor of the autumn moon, bearded, buried, all but fossilized; the dark green sails of the grounded moon-boat stiched with veins of primordial plasma; the kite string that once connected the moon to the Earth now a muddy whisker drilling desperately for rubies."

--Tom Robbins, Jitterbug Perfume
﻿
_____________________________________________________________
Minted Beetroot Hummus
enough for 6 as an appetiser
﻿
i started making this recipe a few months ago, its super handy when you find yourself with a few too many beetroot. just boil and blitz! its now my go-to beetroot recipe, i've adapted it from the book: Veg patch: River Cottage Handbook no. 4, by Marc Diancono (see 'books that inspired this blog' side bar) in the book there are also alternatives to this recipe using artichoke hearts, broad beans, asparagus, or peas. this hummus can be served withcrudites, fish and roast chicken as well as spread on crostini or fresh bread. i've also used lemon balm in place of mint with great results. try oregano or basil if you have them on hand. 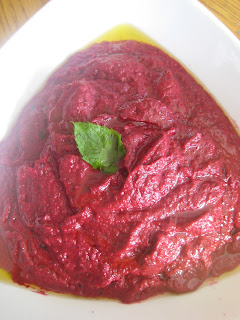